Adaptive and non-adaptive mechanisms of phenotypic evolution in response to urbanization: a case study using the Eastern Gray Squirrel 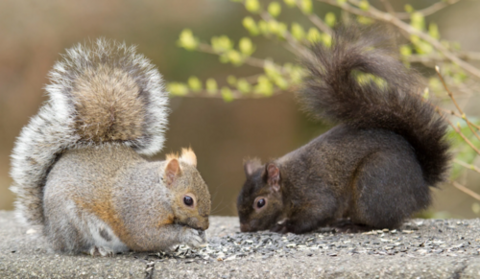 This project is funded by an NSF grant in collaboration with the research groups of Bradley Cosentino (https://landscapemosaic.org/index.html) and James Gibbs (https://www.esf.edu/EFB/gibbs).
Background: Phenotypic divergence between cities and adjacent rural areas has been well documented but disentangling the roles of adaptive and non-adaptive drivers of divergence for heritable traits has proved challenging. Environmental differences between urban and rural areas can cause divergent natural selection, but phenotypic divergence can also result from strong genetic drift due to founder effects and small population size in cities. Gene flow between urban and rural areas should reduce phenotypic divergence, but the strength of this homogenizing force likely varies among cities due to differences in landscape structure. Studies of phenotypic variation and population genetic structure across multiple cities are needed to advance our understanding of how urbanization causes trait evolution via adaptive and non-adaptive pathways. This project seeks to fill this knowledge gap.
Goals: To advance this research agenda we are using the pigmentation model system in eastern the gray squirrels (Sciurus carolinensis). This species is common in both urban centers and rural woodlands throughout its native range in the United States and Canada. Coat color in gray squirrels is typically gray or black (melanic). Melanism is inherited in a Mendelian fashion at the melanocortin-1 receptor gene (MC1R). Melanic individuals have largely disappeared from rural forests where they historically predominated and today persist primarily in cities. Clines in melanism along urbanization gradients may be caused by divergent natural selection interacting with gene flow, but melanic squirrels were often introduced to cities in the past, so their persistence in cities may be a consequence of historic founder events. We will integrate demographic and population genomic approaches across replicate cities to tease apart the adaptive and non-adaptive drivers of clines in melanism.
Science outreach: The project has also a strong public engagement component where this project is used an example of evolution-in-action in people backyards via the SquirrelMapper community science program (https://squirrelmapper.org/) and a schoolyard evolution program that provides school-aged young people the opportunity to measure contemporary evolution firsthand.
Roles: The ecological, demographic, behavioral, and science outreach aspects of this project are supervised by Brad Cosentino and James Gibbs. The Caccone lab is in charge of the population genomic components of the project.
We use ddRadSeq data and whole genome data to look at the distribution of adaptive and non-adaptive genome wide polymorphisms in the gray squirrel. The first ongoing study is a broad scale spatial analyses of gray squirrels from across the Northeast USA to look at patterns of genomic differentiation and gene flow. Next steps include fine scale spatial analyses focusing on multiple cities to look at the distribution of genomic variation across urban to rural gradients and to identify how landscape features affect gene flow along urbanization gradients. This multicity study will include the genomic analyses of the Mc1R locus and other loci that might be involved in color coat variation in this species to evaluate the role of selection in shaping the observed patterns of genetic variation.
Yale group: Dr. Nicole Fusco (https://cgab.yale.edu/people/nicole-fusco) is the postdoctoral associate working on the population genomics aspects of this project. In 2021 we had five undergraduates working on the project either over the fall or spring semester or during the summer.