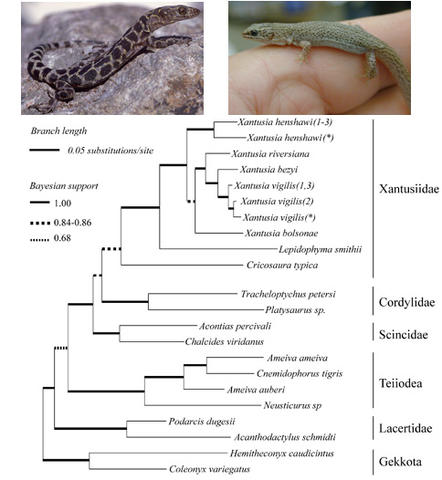 Contentious issues in Night Lizard (Xantusiidae) evolution were revisited using fragments from three mitochondrial genes, the ribosomal genes 12S and 16S, and the cytochrome b gene. All genes were sampled across an ingroup composed of seven xantusiid species and an outgroup of twelve-species chosen to bracket ancestral states for six additional clades of scleroglossan lizards.

With these results we found support for the following conclusions: Xantusiidae is part of Scincomorpha, rather than being allied with Gekkota; Lepidophyma is sister to Xantusia, rather than to Cricosaura; Xantusia riversiana is imbedded within, rather than being sister to other Xantusia species; and rock-morph Xantusia are not related to one another.  Convergence, related to retarded rates of growth and development or to physical constraints imposed by living in rock crevices, may be responsible for much of the character discordance underlying conflicts in xantusiid phylogeny.

Fossil-calibrated Maximum Likelihood-based divergence time estimates suggest that although the xantusiid stem may have originated in the Mesozoic, the crown clade is exclusively Tertiary in age. Thus, the clade including extant Cricosaura does not appear to have been extant during the K-T boundary bolide impact as has been suggested. Moreover, our divergence-time estimates indicate that the xantusiid island endemics, Cricosaura typica on Cuba and Xantusia riversiana on the California Channel Islands, arrived via dispersal rather than vicariance as previously proposed.

This work was carried out by Saverio Vicario while a Yale EEB Graduate Student, now Dr. Vicario is staff at Institute of Biomedical Technologies, National Research Council - Section of Bari.