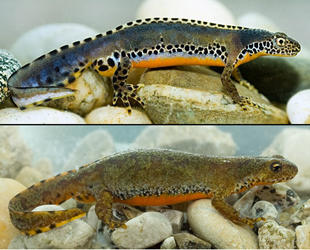 The genus Triturus is a problem for taxonomists. One member, the Southern Crested Newt, has been classified eighteen different ways. The monophyletic origin of European newts within this genus, family Salamandridae, has for decades rested on presumably homologous characters from behavior and morphology. Molecular data challenges this hypothesis, but the phylogenetic position of Triturus newts within the Salamandridae has not yet been convincingly resolved. We addressed this issue and that of the temporal divergence of Triturus within the Salamandridae with novel Bayesian approaches applied to DNA sequence data from three mitochondrial genes (12S, 16S and cytb). Using the molecular phylogeny we map the evolution of life history and courtship traits displayed by Triturus species. Given that their evolution is best explained by multiple independent evolutionary gains, we suggest that new conceptual and experimental approaches are required to explain how complex courtship traits, for a long time assumed to be homologous, might have evolved in parallel. This work was in collaboration with Saverio Vicario and Sebastian Steinfartz, former members of the lab.