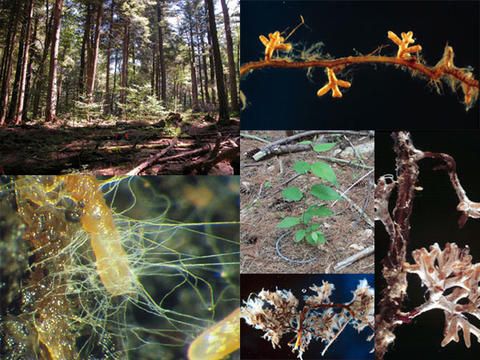 Mycorrhizal fungi are obligatory plant symbionts of trees in forests with networks that connect the roots of trees and seedlings. These networks are thought to mediate overstorey-understorey competition and influence the rate and trajectory of forest succession.  There are several different hypothesized mechanisms by which these networks might influence tree-seedling interactions, one of which hinges on the ideas that, A) seedlings that are networked are able to form symbioses with species of fungi that they would not be able to sustain on their own in the absence of overstorey trees, and B) fungal species associating with networked seedlings confer different growth and survival benefits relative to the ones that seedlings host without overstorey networks.

In the context of a large-scale manipulative experiment at Great Mountain Forest in NW Connecticut, we sequenced the ITS regions of fungi DNAs extracted from ectomycorrhizal root tips of naturally recruiting seedlings that were allowed to network with they mycorrhizas of overstorey trees or were prevented from networking with them.

The research project was performed in collaboration with Oswald Schmitz and Michael Booth who is now at the Institute of Arctic Biology at the University of Alaska, Fairbanks. This project gave rise to follow-up field projects in the Santa Cruz mountains and Interior Alaska and to growth-chamber experiments at the University of Mississippi.