Genetic evidence supports song learning in the three-wattled bellbird (Past) 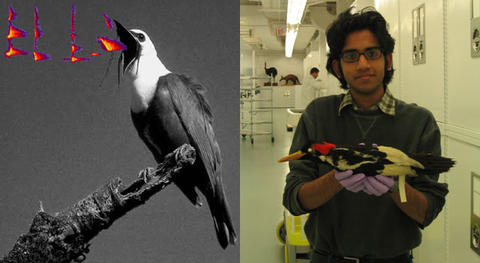 Behavioural data indicate that, unlike other suboscine passerines, the three-wattled bellbird Procnias tricarunculata (Cotingidae) is capable of vocal learning. Procnias tricarunculata shows conspicuous vocal ontogeny, striking geographical variation in song, and rapid temporal change in song within a population. Based on analyses of mitochondrial DNA sequences and nuclear microsatellite loci, we conclude that genetic variation within and among the four allopatric breeding populations of P. tricarunculata is not congruent with variation in vocal behaviour.

Sequences of mitochondrial DNA control region document extensive haplotype sharing among localities and song types, and no phylogenetic resolution of geographical populations or behavioural groups, while microsatellite data document small but significant correlation with geographical distance, but no significant residual variation by song type. Estimates of the strength of selection that would be needed to maintain the observed geographical pattern in vocal differentiation if songs were genetically based are unreasonably high, further discrediting the hypothesis of a genetic origin of vocal variation. These data support a fourth, phylogenetically independent origin of avian vocal learning in the threatened Neotropical endemic, Procnias tricarunculata.

This work was carried out by Vinod Saranathan while an EEB Graduate Student. He is now an Assistant Professor at Yale NUS College, Singapore.