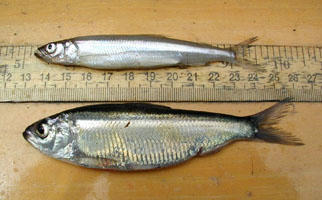 After human induced isolation, species are placed on independent evolutionary trajectories which may lead to morphological, behavioral and life-history variation. Through restoration projects that reestablish connectivity these distinct ecotypes may come into secondary contact. To address questions focused on the ecological and evolutionary consequences of secondary contact from its onset, we have been studying a fish passage project on Rogers lake from its onset (Connecticut, Old Lyme) funded by the NSF and in collaboration with federal (NOAA) and state (CT-DEEP) agencies.

Anadromous alewives are showing population declines and fish passage projects are underway to reconnect anadromous alewives to previously suitable spawning habitat through the installation of fishways on dams and stocking of ready to spawn adults (Fig. 1). One of the consequences of colonial era damming is that anadromous alewives became independently landlocked in several Connecticut lakes and subsequently have divergent morphological and life-history traits (Fig. 1 inset) as well as distinct ecological impacts. Our study uses genomic approaches to provide a detailed account of ancestry and introgression between ecotypes in the lake. By identifying the ancestry of juveniles produced in the lake we are able to identify distinct morphological characteristics of ecotypes as well as hybrids and address the ecological impacts of ecotypes and hybrids through habitat usage and diet. This project provides a rare opportunity to study secondary contact as it is occurring and to elucidate the complex ecological and evolutionary processes that occur during the onset of secondary contact.

Figure 1. A) Rogers Lake (Connecticut, Old Lyme) where a restoration project through the installation of a fishway (B) is bringing distinct ecotypes (inset) of the alewife (Alosa pseudoharengus) into secondary contact (Photos provided by E. Palkovacs and D. Post).