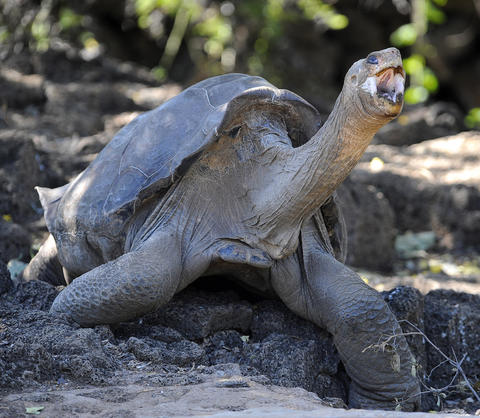 For the past 20 years we have been involved in a long-term project focusing on giant Galapagos tortoises, an iconic complex of 15 species endemic from the Galapagos Islands.  These tortoises, which inspired Charles Darwins theory of evolution by natural selection, include a complex of morphologically and genetically distinct species. They once thrived on the islands, but now are either greatly reduced in number and distribution or extinct. Their demise is due to historical and contemporary factors due to human related activities, such as their massive use as a source of fresh food by whalers and pirates in the late 1800’s and the subsequent impact of invasive species, such as goat, feral cats, donkeys and others that predate on their nests or compete for their food.

Our work proceeds on two fronts. On one hand we are interested in understanding and reconstructing their evolutionary history, which includes reconstructing their patterns of intra and interisland colonization, and understanding how morphological differentiation relates to environmental differences within and between islands. On the other hand, we are using the information we gather from the evolutionary genetic approaches to help the in situ and ex situ programs managed by the Galapagos National Park (GNP).  Restoring giant tortoises to their natural numbers and distribution is one of the most important GNP priorities, not only for the iconic role of these species but also because of their fundamental role as “ecological engineers” in maintaining the fragile ecosystems of the island they inhabit.

Our work concentrates on genetic and genomic analyses and the integration of genetic, morphological and environmental data. We can do this thanks to our very large sample database which includes more than 6,000 blood samples from all populations of extant species and DNA extracted from bones of museum samples of the extinct species.

Recent highlights from this work include:

1) The discovery of living individuals with genetic material from two extinct species of tortoise, from the island of Floreana and Pinta raising the possibility of rescuing these lineages from extinction through selective breeding program. In December 2015 we completed an expedition that gathered lots of media attention, where we found some of these animals and brought them to the GNP breeding center to start the next phase phase of the project, pending genomic analyses that will provide guidance for breeding strategies.

2) The discovery of a new species of giant Galapagos tortoises in the most populated island of the archipelago, Santa Cruz island. the species, Chelonoidis donfaustoi, was named after a famous ranger from the Galapagos National Park that has dedicated all his life to breed and manage tortoises in captivity, Mr. Fausto Llerena.

3) The genomic legacy of Lonesome George. We sequenced the complete genome of Lonesome George, the last male of the species Chelonoidis abingdoni, endemic of the island of Pinta in the Galapagos archipelago. Lonesome George was the most famous resident of the Galapagos islands until he died in 2012. We compared the genomic variants in his genome to the ones found in other Giant Galapagos tortoise species from different islands and the other giant tortoise, the Aldabra Giant tortoise, Aldabrachelys gigantea, from the Aldabra atoll in the Indian Ocean. Variants in regions associated with longevity, cancer resistance, immunity in other mammal including humans were identified, providing future research directions in this human health related topics. The data gathered from the analyses of its genome will also contribute to foster the ongoing work on conservation of the extant species and in helping elucidated the patterns and tempo of colonization of the islands.

Most of our past work used genetic markers such as mitochondrial DNA microsatellite loci to analyze patterns of genetic polymorphism. Although we continue to use them, as for some questions they can still provide powerful answers in a time and cost effective way, we are also using genomic markers such as Single copy Nucleotide Polymorphisms (SNPs) and whole genome analyses to harness the power of thousands of genetic mark for evolutionary and conservation analyses.

A large number of Yale undergraduate, graduate students, and postdocs have contributed to the research. Seminal to our progress has been the inclusion in our team of several very talented and committed postdocs that are now faculty members in Universities across the globe, but still very much involved in several of the ongoing projects. Past and present postdoc and graduate students include: Maud Quinzin, Stephen Gaughram, Josh Miller, Danielle Edwards, Ryan Garrick, Edgar Benavides, Luciano Beheregaray, Claudio Ciofi, Ylenia Chiari, Scott Glaberman, Valerio Ketmeier, Gabriele Gentile, Michel Milinkovitch, Nikos Poulakakis, Michael Russello, and James Gibbs. This work is conducted in full collaboration with the Galapagos National Park and is part of the Giant Galapagos Tortoise Initiative led by the Galapagos Conservancy. Sources of funding include multiple foundations, such as the Galapagos Conservancy, the Swiis Friends of Galapagos, the Oakley foundation, National Geographic Society, Turtle Conservation, The Paul and Bay Foundation, and the Eppley Foundation.

24) Poulakakis, N., M. A. Russello, D. Geist, and A.CACCONE. Unraveling the Peculiarities of Island Life: Vicariance, Dispersal and the Diversification of the Extinct and Extant Giant Galápagos Tortoises. Molecular Ecology 21, 160–173.