Was frozen mammoth or giant ground sloth served for dinner at The Explorers Club? (Past) 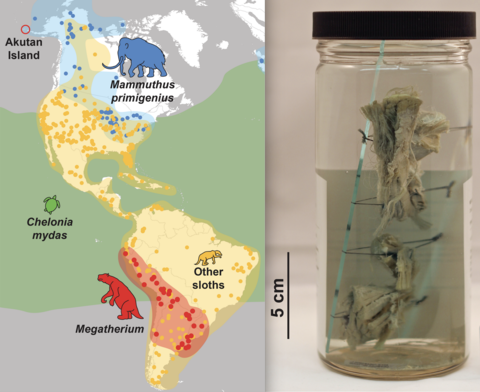 Accounts of woolly mammoths (Mammuthus primigenius) preserved so well in ice that their meat is still edible have a long history of intriguing the public and influencing paleontological thought on Quaternary extinctions and climate, with some scientists resorting to catastrophism to explain the instantaneous freezing necessary to preserve edible meat. Famously, members of The Explorers Club purportedly dined on frozen mammoth from Alaska, USA, in 1951. This event, well received by the press and general public, became an enduring legend for the Club and popularized the notorious annual tradition of serving rare and exotic food at Club dinners that continues to this day. The Yale Peabody Museum holds a sample of meat preserved from the 1951 meal, interestingly labeled as a South American giant ground sloth (Megatherium), not mammoth. In collaboration with the Yale Peabody Museum, and CGAB, DNA was extracted and analyzed to confirm it’s taxonomic origin and validate if it really belonged to a South American giant ground sloth, as indicated by a label on the bottle.

A fragment of mitochondrial cytochrome-b gene was sequenced and used to verify its identity, which if genuine, would extend the range of Megatheriumover 600% and alter our views on ground sloth evolution. Our results indicate that the meat was not mammoth or Megatherium but green sea turtle (Chelonia mydas). The prehistoric dinner was likely an elaborate publicity stunt. Our study emphasizes the value of museums collecting and curating voucher specimens, particularly those used for evidence of extraordinary claims.