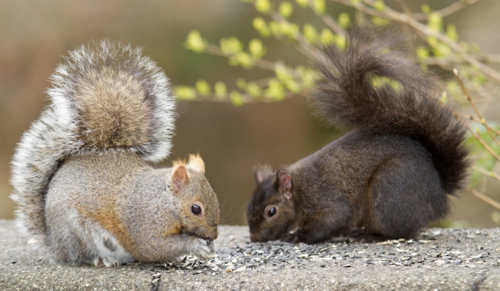 Over half of the world’s population lives in cities, and urban areas are among the fastest growing ecosystems on Earth. Urbanization causes dramatic environmental change, from the conversion of natural areas to buildings and roads, to increased air, water, light, and noise pollution. Urbanization often reduces biodiversity, but it can also affect the way organisms evolve. Organisms that thrive in cities commonly differ in their morphology, behavior, and physiology from populations of the same species in rural areas. How do these differences arise? This project’s focus is one of the most common and visible animals in cities in the United States and abroad: gray squirrels. Gray squirrels provide an ideal model system for exploring the different ways urbanization affects evolution. Gray squirrels have two common coat colors, gray and melanic, that are determined by a single gene. The melanic form used to be common in much of the northeastern United States, but today it is abundant primarily in cities.

Why did melanic squirrels decline in rural forests but persist in cities? Results from this project will shed light on fundamental questions about how urbanization affects the way organisms evolve, that is, the degree to which evolutionary change in cities and surrounding rural areas is due to natural selection, chance, or a combination of both. The project will engage thousands of citizen scientists and students in recording observations of squirrel coat colors and collectively measuring in their backyards how evolution is shaped by urbanization. The research will address longstanding questions about urban evolution specifically and evolutionary biology more generally and help guide efforts to enhance biodiversity and human well-being in cities.